Recently, I planned and implemented this probability lesson in both a Grade 5 and a Grade 3 classroom respectively.  This is a example of a lesson that could be used in any Primary/Junior classroom and would also be an easy game to send home for students to play with family members.  Many substitutions could be made for the snap cubes e.g., buttons, bingo chips, coins, bread tags

I started by saying that I keep hearing people say that some numbers are luckier than others and I want them to help me discover whether this is true or not.

Big Idea:  We can estimate or make predictions about a probability situation by using an appropriate model and conducting an experiment.

Curriculum Expectations:  By the end of … 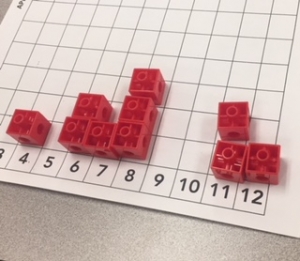 Play:  Is This Game Fair?

Divide the class into pairs (Player A & Player B).   Player A rolls a number cube (regular dice).  If the number is even, Player A gets a point and if an odd number comes up Player B gets a point.  Take turns rolling and keeping score.  After everyone has completed one game (10 rolls in total) gather the data from the class. With a show of hands ask how many A’s won, B’s won and how many ties?  Record this using tallies. 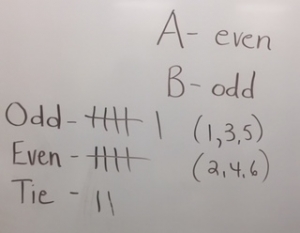 Task #1:  “Winning Number” – The object of this task is to find a “winning” number.  Each student has their own pair of number cubes and a game board.  After rolling the 2 number cubes, they add the 2 together and put a snap cube above the correct sum on the board e.g., 6 and 4 goes above 10.  The winning number is the one that gets to the top first.  Write your winning number on a post-it note and put it in the appropriate spot on the class graph (see photo).

Task #2:  “Clear the Board” – This game is played in pairs and the winner is the one who clears their board first.

Each player has their own game board and 10 snap cubes.  Using the 10 snap cubes, place them on the board above the numbers wherever you want.  You can place more than one cube above a number.  The first player rolls 2 number cubes and adds them together.  If there is a cube above the sum, the player takes one cube off that number.  Whoever clears his/her board first wins the game.  Play it again.

Thinking back to our first game, “Even and Odd”, is this game still fair, if we use 2 number cubes?  How could we find out? (This could be next day’s investigation.)

Closing:  The object of this game is to “stay standing”.